A Note From The Founder

In 2013, I quit my full time job and bought a 24-foot aluminum box truck which I fittingly named Bertha. My 5-foot 2-inch stature needed two pillows to reach the gas and brake petals on Bertha, but ask anyone around, I drove her like a champ. The goal was to convert Bertha into a bohemian boutique-on-wheels, and while the idea sounds like it came to me on a whim, many sleepless nights pouring over a business plan, strategizing over fundraising, and maneuvering the intricate details of starting a business ensued.

The build out was a true labor of love with my family and friends donating their nights and weekends, time and skill, to this far-fetched idea I had of a traveling store a la gypsy caravan. I will never be able to thank them enough. Nomad – The Wandering Fashion Boutique, took her maiden voyage from Brooklyn to the University of Delaware on April 10th 2013. My boyfriend played hookie from grad school to come be my sales assistant. I did not eat a single thing all day. What if no one liked anything I picked out? What if we broke down? What if it rained?

The day, like the two-and-a-half years that followed, was a huge success. That’s not to say I never broke down – I did, 3 times – or that it didn’t ever rain – it did, often (and annoyingly leaked often) – or that I didn’t have days or seasons that were slow – of course I did.  The next few years included some of the most deeply challenging and deeply rewarding experiences I have ever had, with thousands of customers, onlookers, and supporters I will always feel connected to.

Unfortunately, after a long legislative battle with New York City, the end of big Bertha’s adventure came in the Fall of 2015 when I made the difficult decision to sell her. If there’s one thing I’ve learned in my entrepreneurial journey it’s that the road only goes one way, onward.

So onward we go, and from the bottom of my big open heart, thank you to all who have been on this journey with me. I am forever grateful. 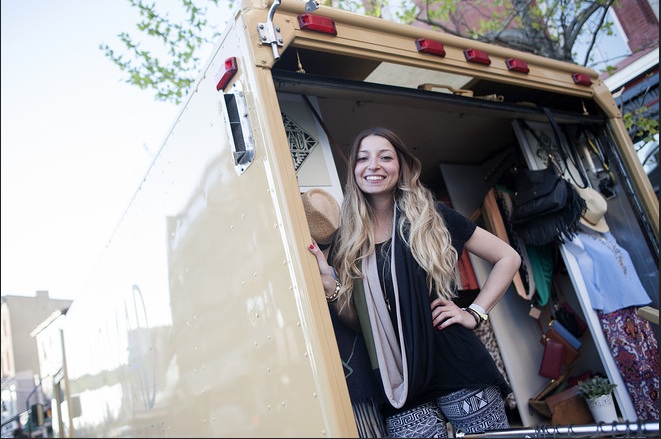